Feb-01-2020 - Update Batch #28
That's right, it's Update Batch #28! We are very proud to announce a full Treasure Trails overhaul, as well as two new Quests and much more!

When certain creatures die, there is a chance that they will drop a clue. This clue could lead you to someone in ScapeRune, a spot where you need to dig using a spade or something you need to search, such as a crate or chest.

There are different types of clue scrolls that you may find on your treasure trail:


If you happen to receive a coordinate clue, navigating to the spot isn't difficult - just visit the Observatory (some distance south-west of Ardougne) and ask the professor to teach you how to navigate. 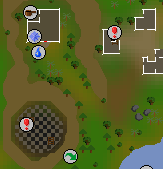 Coordinate clues need sextants to tell them the coordinates of the place where they're standing. The Observatory professor will help you get one of these. To use the sextant left-click or right-click and select 'Look through Sextant'. When you use it, you'll have to use the little arrow buttons on its interface to get the horizon and sun correctly centered in the sextant's viewer. When they're correctly positioned the sextant will tell you your coordinates.

Compare these to the coordinates on your clue, and you'll see whether you need to go north, south, east or west to find your treasure.

The Observatory near Ardougne has been ransacked by a family of nearby goblins. Can you help the professor to rebuild it?

Run for your lives...the zombie ogres are here for your flesh! An ogre ceremonial dance area, used to communicate with ancient ogrish ancestors, has been overrun with diseased undead ogres. How could something like this have happened? And what sort of rewards could an enterprising adventurer gain from exploring the tombs of such a place?